Please welcome Rita-nominated guest blogger, Sarah Andre, as she extends congratulations from all the Kiss and Thrill gals to Sharon Wray for her fantastic debut novel, Every Deep Desire. Thanks for posting today Sarah. I’m so excited for Sharon Wray, and know my readers will be, too!

All nine of us are up here and the champagne is overflowing!

Welcome, friends, as we celebrate blog-mate and close friend, Sharon Wray on her debut day. Every Deep Desire is book one in her Deadly Force series and a novel that garnered her one of eight RWA Golden Heart® nominations. 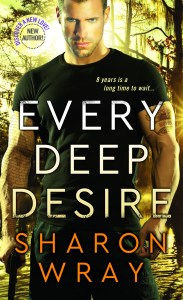 Like most things Sharon undertakes (studying wedding dress design in the couture houses of Paris, a mother of twins, a librarian and astounding photographer) she added her unique flair to the modern day romantic suspense. Every Deep Desire is a sweeping saga of haunted pasts, tortured secrets, epic yearning and a love that transcends all. K&T members thought this blog post should reflect a unique approach as well, so we’ve each participated in the interview. Grab some bubbly and join us!

Need-to-know questions from the great interviewer, James Lipton; “Inside the Actors Studio”:

When did you know you wanted to write novels, and when did you actually begin writing?

When my dad was diagnosed with cancer in 2004 (my twins were four), I started reading romance novels again to help offset some of the grief. After reading Night Embrace by Sherrilyn Kenyon, Dark Prince by Christine Feehan, and Letters to Kelly by Suzanne Brockmann, I decided I wanted to write a novel myself. Except I had no idea how so I joined RWA in March 2, 2004. My debut novel comes out March 6, 2018.

This modern retelling of Romeo and Juliette is fascinating. How did Shakespeare influence you to create your strong heroine?

It was a trip to Verona and a guide took us to see the city’s most famous celebrities: Romeo and Juliet. We went to Juliet’s courtyard and Romeo’s palazzo, and she told us the history of this famous story. A history that included six earlier sources of the love story, including a mention in Dante’s Divine Comedy. But the detail that caught my attention was that she kept calling the story Giulietta and Romeo.

Apparently, in all of the prior source material that Shakespeare used, Juliet was the protagonist. The story belonged to the heroine!

When I got home, I read translations of all of the source material and studied the literary criticisms. Shakespeare had not only made Juliet the main protagonist, but that it was the first time in all of his works that a woman was the hero of a play. The reason why deserves a blog post all its own, but when you study the text you can see that Juliet is given half of all of Romeo’s sonnets. She makes plans and follows through while the men can’t control their tempers. She even kills herself like a man while Romeo uses poison—a woman’s weapon.

Up until this time, within my own work, I’d assumed that the men in my Deadly Force series were the protagonists. The men had suffered terribly—violence, combat, POW camps, etc—so why wouldn’t they be the ones who had to change the most? But when I looked at the story emotionally (like I’d studied Romeo and Juliet), I realized that my heroines had the harder journey. They might not have undergone physical suffering, but their emotional journeys came with higher risks. Once I made my heroines the protagonists, the stories came together in a way I’d never expected. And Juliet, in Every Deep Desire, took me on a journey that left my breathless and exhausted. And all of the work to rewrite the books has been worth it.

Do you believe in serendipity? 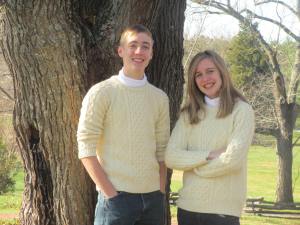 Your career (and how massively busy you are writing, editing and promoting the 3-book deal) is taking off just as your kids headed off for college. Is this the perfect time or do you wish you were well into your publishing career?

While part of me would like to already have ten books on the shelf, the truth is I wouldn’t have been willing to give up the time with my family that that would’ve required. I do think that God’s timing is perfect. Now that my twins are in college, I have the freedom to work, each day, as long as want. For the first time in 18 years, my time is my own and I’m spending almost every waking hour writing or with my husband.

What authors have been your greatest influence? And why?

I know the Bronte sisters are a clichéd choice, but clichés don’t become what they are for no reason. When I was in sixth grade I started Jane Eyre on Thursday morning and finished it on Friday at one a.m. When I woke up at noon on Friday, I started Wuthering Heights and stayed up all night, not finishing it until almost four a.m. Then I crashed. When I woke up later on Saturday, I remember going downstairs and feeling . . . different. I felt awake. I realized that life was much larger, and far more dangerous and exciting, than I’d ever thought possible. And the realization that I, too, might grow up and fall in love filled me such wonder and joy, I could barely breathe.

Tell us a bit about the overall story line for the series.

The series is about a team of ex-Special Forces soldiers, accused of vicious war crimes, who are desperate to prove their innocence and find their enemies before they attack again. As these men struggle to rebuild their lives and redeem their honor, it’s the women they love who teach these alpha males that Grace always defeats Reckoning.

What is the tentative schedule for deadlines and publishing dates?

One Dark Wish, (book 2) is currently in revision and I hope to finish soon. This book is tentatively scheduled for publication January 2019.

You, of all people, know what patience and perseverance means in this business. Do you have any advice for writers still waiting for ‘the call’?

Two things in particular: I wasted so much time wondering “if” it would ever happen that I wish I could go back and tell myself to worry less and laugh more. If you begin as you wish to proceed, things will work out eventually. Maybe not the way you expected, or in the time frame you wanted, but usually even better than you’d hoped. So write every day as if you’re published. Take classes, learn your craft, and build your network of writing friends. That way, when the time comes, you’re ready.

The second thing is an order from Winston Churchill. And for our purposes, the enemy is our own self doubt:

Sharon, we all wish you an unforgettable debut day and a bestselling series!

Thanks so much, Sarah, for hosting me today. It’s such an amazing thing to celebrate my debut with my Kiss and Thrill sisters.

He’s taking it all back
His honor, his freedom, and the woman he loves

Rafe Montfort was a decorated Green Beret, the best of the best, until a disastrous mission and an unforgivable betrayal destroyed his life. Now, this deadly soldier has returned to the sultry Georgia swamps to reunite with his brothers, and take back all he lost. But Juliet must never know the truth behind what he’s done…or the dangerous secret that threatens to take him from her forever.

It took Juliet Capel eight long years to put her life back together after her husband was taken from her. Now Rafe is back, determined to protect her at any cost, and it’s not just her heart that’s in danger. The swamps hold a secret long buried and far deadlier than either of them could have imagined…

BUY LINKS: (Please don’t forget to help a debut author out by leaving a review!)