Several of my friends are donating parting of their sales to worthy charities this year. Krista Hall below, details many of them in her wonderful post. I also wanted to do a shout out to my friend, author Susan O’Brien,

who also donates a part of the proceeds from her wonderful book, Finding Sky, which goes to help charities involved with missing children.

Tis the Season to Give and Give Back

Thanksgiving is over. We Americans were thankful for our blessings and then quickly pivoted to preparations for the season of giving (aka Black Friday, Small Business Saturday, Cyber Monday, etc.). It is also the season to give back. Today, I have my own opportunity to give back. As it happens, it is also a second chance because it was an opportunity that I passed up the first time it presented itself.

What was the opportunity? (You were wondering that, right?) Modeling.

Yes, as surprising as it may sound, late last week I found myself suddenly in demand as a model. In a fashion show for a holiday luncheon benefit. An event I was helping to organize and planning to attend.

What I hadn’t planned on is the catwalk.

When the call to action came last week—We’re down three models; please help us out—the words on the tip of my tongue were all negative. I can’t. I ate too much pumpkin pie last week. I might trip on the catwalk. But before those words could launch into sounds of refusal, I remembered how much generosity, support, and kindness has been given to me this year. These same women who are dedicating their time, talents, and energy to organize the Northern Virginia Alliance League (NVAL) holiday luncheon to benefit Friends of Guest House, were also the same women who celebrated with me earlier this year when I announced that I had published my first book. 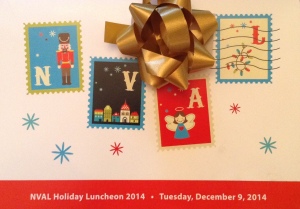 My heart has been full of gratitude at their enthusiasm and support expressed in word and deed. Not only have many of my NVAL friends bought Broken Places, they have also taken the time to write reviews on Amazon, to express interest in the writing and publishing process, to invite me to talk to their book groups, and to give copies of Broken Places to their friends.

It has truly been a wealth of blessings. I have a pretty good idea of how George Bailey must have felt at the end of It’s a Wonderful Life. (Another holiday favorite of mine.) How could I say no to these friends who have given me so much? It was my time to give back. Keep your fingers crossed I don’t trip over my own two feet!

Do-gooders and second chances are two prominent themes of Broken Places so in the spirit of giving back, I will be donating half of my December Amazon royalties to Friends of Guest House, a 501(c)(3) serving women ex-offenders returning to the community after serving their time. Sometimes a helping hand can make all the difference. I think the mission statement from the Friends of Guest House website says it best: Help, hope, and new beginnings for Northern Virginia’s ex-offender women.

Here’s a list of other authors who are doing good while entertaining us with stories that give us the opportunity to walk in someone else’s shoes, even if just for a few short hours.

Wishing you and your family peace and joy in this season of giving!

All month, the kindle edition of Broken Places is a free download for anyone who purchases the paperback edition through Amazon. Give a gift and keep one for yourself!